Last Sunday, I tightened up my goggles, adjusted my bike helmet, and laced up my running shoes to compete in my first sprint triathlon in Waco…and what an awesome experience it was! It was a weekend filled with a super helpful race production team, encouraging fellow competitors, and the most supportive spectators.

So that brings me to today, reflecting on training, preparing, and competing in my first sprint triathlon. Let’s dive in! (pun totally intended)

A sprint triathlon is half of an olympic triathlon and is typically around a 400m swim, 12.5 mile bike ride, and a 3.5 mile run, in that order. I’ve always been the type that as long as I know the end goal, I’ll find a way to reach it. So I didn’t follow any set training plan. My workouts were nothing more complicated than averaging 40 laps (half mile) of swimming, 15-25 miles of biking, and running until I couldn’t run anymore (I really hate running). I would focus on one aspect of the race per workout until I got to a point where I could do them back to back in the same workout if time allowed.

Overall, I ended up dedicating 116 workouts specifically to triathlon training, which equated to 74.28 hours and 620.51 miles of swimming, biking, and running over the last few months. Needless to say I was fully trained and most likely could have competed in the full, olympic triathlon. However, hindsight is 20/20 and it would have been awful if I put myself through an olympic and ended up hating triathlons all together…so I am happy I stuck with the sprint.

Prior to training for a sprint triathlon, I only thought I was in shape. After all I eat relatively healthy and I was averaging 120 miles a week on my bike…but when I threw swimming and running into the mix, I got into super shape. I gained quite a bit of muscle tone, but ended up weighing the exact same on race day as I did when I began training…which makes total sense – combining three taxing activities together can really tone and trim a person up! As cliche as it sounds, I truly believe I am in the best shape of my life!

As far as becoming familiar with what to expect on race day, the internet taught me everything I know. I personally didn’t know any triathletes prior to race day, so YouTube and blog articles were my best friend. Watching YouTube videos of what to expect on race day turned into watching inspirational videos and documentaries about triathlons/triathletes on Amazon Prime when race day was two weeks away. There is something about pairing an okay story with the Rocky theme song, and adding in a few dramatic animations that really motivates a person….I’m not saying it’s for everyone, but hey it worked for me 🙂

I also Googled several images of triathletes to figure out what kind of outfits real triathletes wear. I wanted my competitors to know I meant business when I showed up on race day. Ha. Not really, but I did Google what triathletes wear because, shoot, I had no clue.

Turns out the internet didn’t mislead me, all that YouTube watching, Amazon Prime perusing, and blog reading had me fully confident and prepared…I was pleasantly surprised not to have any surprises on race day.

The internet is a truly wonderful thing.

I got Waco on Saturday morning so that I could attend the athlete briefing that afternoon. Which was by far the most insightful and productive thing I could have done for the race. The ever so enthusiastic race director, Frank, led the briefing and was absolutely awesome. Aside from answering any and every question from athletes, he held a seperate mini meeting for any first timers wanting to know a bit more – I was incredibly thankful for his patience and knowledge.

Race day at last! The transition area where you put your bike and gear opened at 5AM. Being the anxious and never late person I am, we were there by 4:30…I gotta say not a lot of action out on the Waco streets at that time of the morning, which I suppose is a good thing.

Once transition opened at 5 I toted my bike and gear to my designated area and laid everything out just as precisely as the 10 YouTube videos I watched about “your transition area” demonstrated. That took me all the way to 5:05AM. So I sat, people watched, rearranged my gear, sat, people watched, rearranged my gear, repeat, repeat, repeat. People all had their own race morning routines which was fascinating to watch, but just like when I grew up playing sports, I didn’t need any pump-up music, a boost of energy, or a need to go for a quick, swim, bike, or run. I was ready.

I sat through one more athlete meeting and then it was go time!

One-by-one the athletes entered the Brazos River. I’m not sure if it was the fact that my brother told me the alligator gar were going to bite my toes or that adrenaline took over, but once I hit the water I never slowed down.

I was super pumped getting out of the river because I knew I killed the first part of the race. I ran to the transition area to where my bike was racked only to find it wasn’t there. Two thoughts crossed my mind, someone stole it or they disqualified me from the race for some reason and this is their way of letting me know. Then I realized neither of those things could have possibly taken place. So there I was, browsing aisles and aisles of bikes…all 1,000 of them – periodically looking at my race number on my arm to confirm I was in the right area. After 4 minutes, I finally realized the number on my arm wasn’t 579, but 569. I went over 10 bikes from where I had initiated my search to 569 and what do you know, there was my bike…right where I left it.

After pretending like nothing happened, I headed out through the streets and highways around Waco on my bike. Overall it was a relatively peaceful ride besides the occasional wind I felt over my left shoulder from possible Tour de France contenders zooming by me.

As I was racking my bike and heading out to run, in typical me fashion, I waved and had a conversation with my parents in the middle of the race. Then I finally decided to go run. The run was pretty challenging after swimming and biking, but overall it wasn’t bad. I appreciated all the clever signs and spectators along the way.

Of course the best part was crossing the finish line, getting your medal, and hearing your name announced. I ended up finishing in an hour and 42 minutes which was a few minutes faster the average female time for the course. So I’ll take it!

However, I think next time remembering where I left my bike and not having a conversation in the middle of the race will cut off a solid amount of time!

Would I Do It Again?

I will for sure do more sprint triathlons. I would like to get to point where I can be competitive in olympic triathlons – I just have to remind myself, one goal at a time and I’ll get there!

I had an absolute blast and would encourage anyone to do a sprint triathlon. People of all shapes, sizes, ages, and ability compete and it was truly inspiring to see. Some were there to win, some just wanted to finish, and others fell somewhere in between. I believe it is a sport that with a little discipline and goal setting, can be accomplished by all.

Not to mention triathletes are some of the most encouraging and nicest people in sports. They’ll motivate you while you run, cheer you on as they zoom by you on their bike, answer any questions you have, congratulate you, give you a pat on the back, offer support, give you tips, on and on.

So if you’re looking for a rewarding, fun, and encouraging environment triathlons are the way to go. Seriously – from the race director, to athletes, to volunteers, to the people who woke up early Sunday morning to line the course with funny signs and inspiration and everyone in between…you simply couldn’t find better.

Just as the TriWaco race director, Frank, reiterated several times over the weekend, you’ll always remember your first triathlon and welcome to the addiction…I believe he is right! 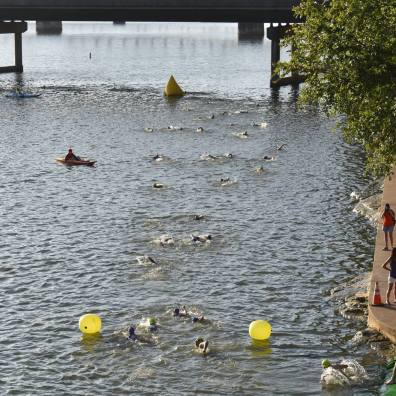 Heading out on the Bike

Checking out my race time

4 thoughts on “A Great First Tri”